"Dream of a warm and safe place." 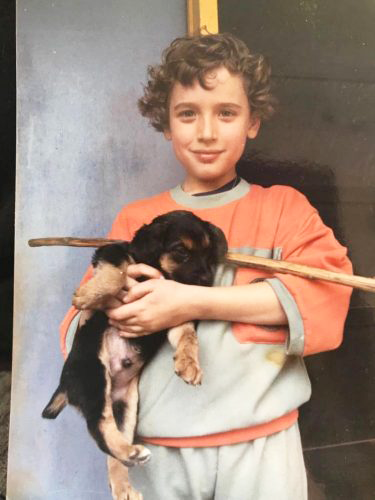 During the past 2 years I've been thinking about Death perhaps more than the "usual". Not my own one. I've already grown out of the teenage temptations, plus I've developed a solid system of reasoning and values. Death is merciless. Death is not fair. Death is an opponent worthy of respect but also an enemy you have to fight with everything you've got.

The Internet is a strange place. Perhaps it always has been. Perhaps even more during the 90s. I've had a chance only to catch a glimpse of that 'era', as now its atmosphere is buried under a chaotic mix of (anti)social media. I've met Adrian by a "well calculated" accident. He was humble, likable, reserved, intelligent and - I dare say - charming. That one book that only you've read and it's your favorite. Or at least this is the plausible way to think about it.

I wish I've had more chance to talk to you. Perhaps I wish I wasn't that much of an asshole and I'd do it more. It's not like you were the easiest person to talk to either. But we didn't need to talk at all, anyways. Now, I realize how much I've learnt from you. It's just I could never comprehend why you had to attract so much pain, even by my standards. Yet, my opinion and support had never changed. And it won't.

You were more than a beautiful mystery.

Yet, sometimes we realize we know someone we know, but actually we don't. We have too many shapes and shades, I guess.

Fake news is the present fact of life. When reading history, especially history dominated and reported by Eurocentrism, make sure to read and get the point of view of the ones, for whom the history has been written. I don't know about the angels, but the Devil is in the details.

What was the reason? I don't know. But, I will find out.

“You only truly possess that which you cannot lose in a shipwreck.”
— Imam Al-Ghazali

“To live outside the law you must be honest.”
— Bob Dylan, “Absolutely Sweet Marie”

“The years pass, the unimaginable becomes everyday, the hideous becomes tedious, the unbearable becomes routine. I push it all into the dark corners of my mind. And it's incredible; the room back there. Amazing. What one can live with.”
— Sand dan Glokta, “The First Law”

“They hate you if you're clever, and they despise a fool.”
— John Lennon, "Working Class Hero"

“Arrakis teaches the attitude of the knife - chopping off what's incomplete and saying: 'Now, it's complete because it's ended here.'”
― Frank Herbert, Dune

“As far as Adrian being "shady", I prefer the words of Douglas Adams: "He's jus zis guy, you know?"”
— Internet commentator “boppers”

“Everyone is potentially under opposition control.”
— The Moscow Rules

“Lamo. The Roy Cohen(sic) of our time.”
— Wired commenter "lindjo"

“...What you see is not world but a representation formed in and by your own mind. Everything that you experience you know by faith.”
— P. K. Dick; “The Transmigration of Timothy Archer”

“It is criminal to steal a purse, daring to steal a fortune, a mark of greatness to steal a crown. The blame diminishes as the guilt increases.”
— Johann Friedrich Von Schiller

“No human being, when you understand his desires, is worthless ... even the most evil of men and women, if you understand their hearts, had some generous act that redeems them, at least a little, from their sins.”
― Orson Scott Card, Speaker for the Dead

“I was a media whore when Adrian Lamo was running off to school with jam on his face. He'll never catch up.”
— Oxblood Ruffian [cDc]

“Success is a relative thing — and the victory of a boy at marbles is equal to the victory of an Octavius at Actium when measured by the scale of cosmic infinity.”
— H.P. Lovecraft

“Oh we're all so funny, meeting you, thinking we will each be the one thing you treat decently: So funny, and so wrong.”
— my ex, so all of you have been warned

“… understanding his magnetism — the shell of his self-destruction only barely covered the megawatts of charisma seemingly woven into his skin.”
— another ex, so all of you have been warned

“It ain't braggin' if it's true.”
— Mohammed Ali (back when he was Cassius Clay {before he fought too many fights [via Dan Bern]})

“If a person who indulges in gluttony is a glutton, and a person who commits a felony is a felon, then God is an iron.”
— Spider Robinson; God Is An Iron

“Give me the Justice Department, Entertainment Division.”
— The Running Man

“Greatness is a transitory experience. It is never consistent … The person who experiences greatness must have a feeling for the myth he is in. He must reflect what is projected upon him. And he must have a strong sense of the sardonic.

This is what uncouples him from belief in his own pretensions. The sardonic is all that permits him to move within himself. Without this quality, even occasional greatness will destroy a man.”
— Frank Herbert; The Dune Trilogy

“At least once every human should have to run for his life, to teach him that milk does not come from supermarkets, that safety does not come from policemen, that 'news' is not something that happens to other people.”
— Robert Heinlein; The Number of the Beast

“Silence is argument carried on by other means.”
— Ernesto 'Che' Guevara

“You can calculate the worth of a man by the caliber of his enemies.”
— Gustave Flaubert

“It all will fall / fall right into place …”
— Modest Mouse; Gravity Rides Everything

Those were some of your favorite "rules". I came to like most of them as well. Well picked and said. With style.