"Let chaos reign, then rein chaos. Does that mean that you shouldn't plan? Not at all."

Hey, there. It was long time since we've heard of each other. I know, I have this tendency of sudden shock-appearances and slips.

During the last 2 years I'm dealing with more economics than I've ever expected. 2 weeks ago I turned down an offer to travel to East Asia in order to lay down the architecture of a coin trading platform. I'm sorry I've been already fooled to do that in 2011, I've got my share of "coin platforms" already (I am referring to that Bulgarian platform which was one of the 7 in the world trade platforms until it was supposedly artificially "hacked" so the owner can loot (lol?) all the coins inside it and disappear while wondering where to cash that).

Anyways, this post is not about Bitcoin, but economic markets in general. I'd like to share an interesting market observation I've came across recently. Below is a graph which shows stock prices since 1926.

Bulls and Bears markets by data of Standard & Poors 500: 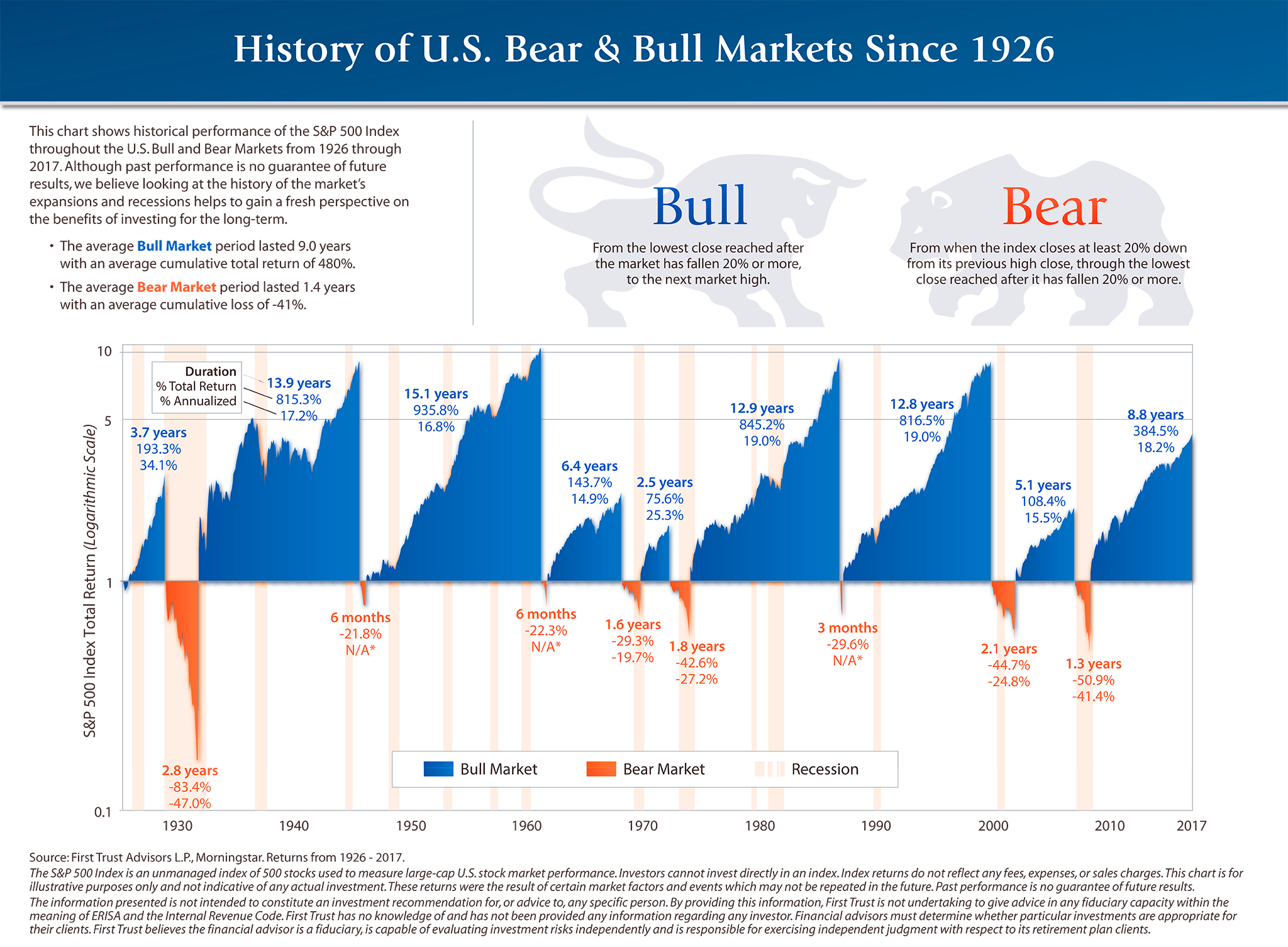 The Standard & Poor's 500 is a stock market index based on the market capitalizations of 500 largest companies with common stock listed on the New York Stock Exchange. It's basically an overview of "how the market is doing today". The higher the value of a stock (part of a company), the better return it will yield if you invest in the company, by buying a stock from it. Of course, the more people buy, the more the price is about to increase, which again leads to even more people buying. However, as the stocks can be artificially created by devaluation of shares and emitting new stocks, the physical goods and revenue streams cannot be modified in that manner. Ultimately, each company has a financial limit, after which investing in it does not increase the actual revenues in any way.

I know in reality it is more complicated than that, but I'm just trying to illustrate the basic point here. Simple is better than complex, especially in pattern recognition tasks. I'm also doing some little project in which I'm trying to lay down and map important historical events in order to discover "hidden" interrelated patterns between them. Something like Grendel's 2012 album, Timewave: Zero brought to real life. Too bad, they're not making music like that anymore.

Anyways, I've been always quite curious about the "Bull" and "Bear" markets. Let's start with their definitions:

Bull market: People have money, everyone is buying stuff, prices are ricing, the show is on!

Bear market: There's no money to spend, lawmakers keep coming up with new "regulations" in order to win the difficult vote, corporations lay off people. Business recovers slowly in order to start another Bear market.

It's important to make a distinction, though. A bear market does not ultimately mean a "crisis". It would be more accurate (or less wrong) to define the "bear markets" as the period right after the bust of a bubble or the critical inflection point of a crisis. But since the crisis are periods of time, rather than exact dates, the exact sizes are vague. This is why we have to apply some basic pattern recognition skills in order to remove the noise off the data and perceive only the most important features of the process. So we can end up with an abstract definition (a model) of our concept. 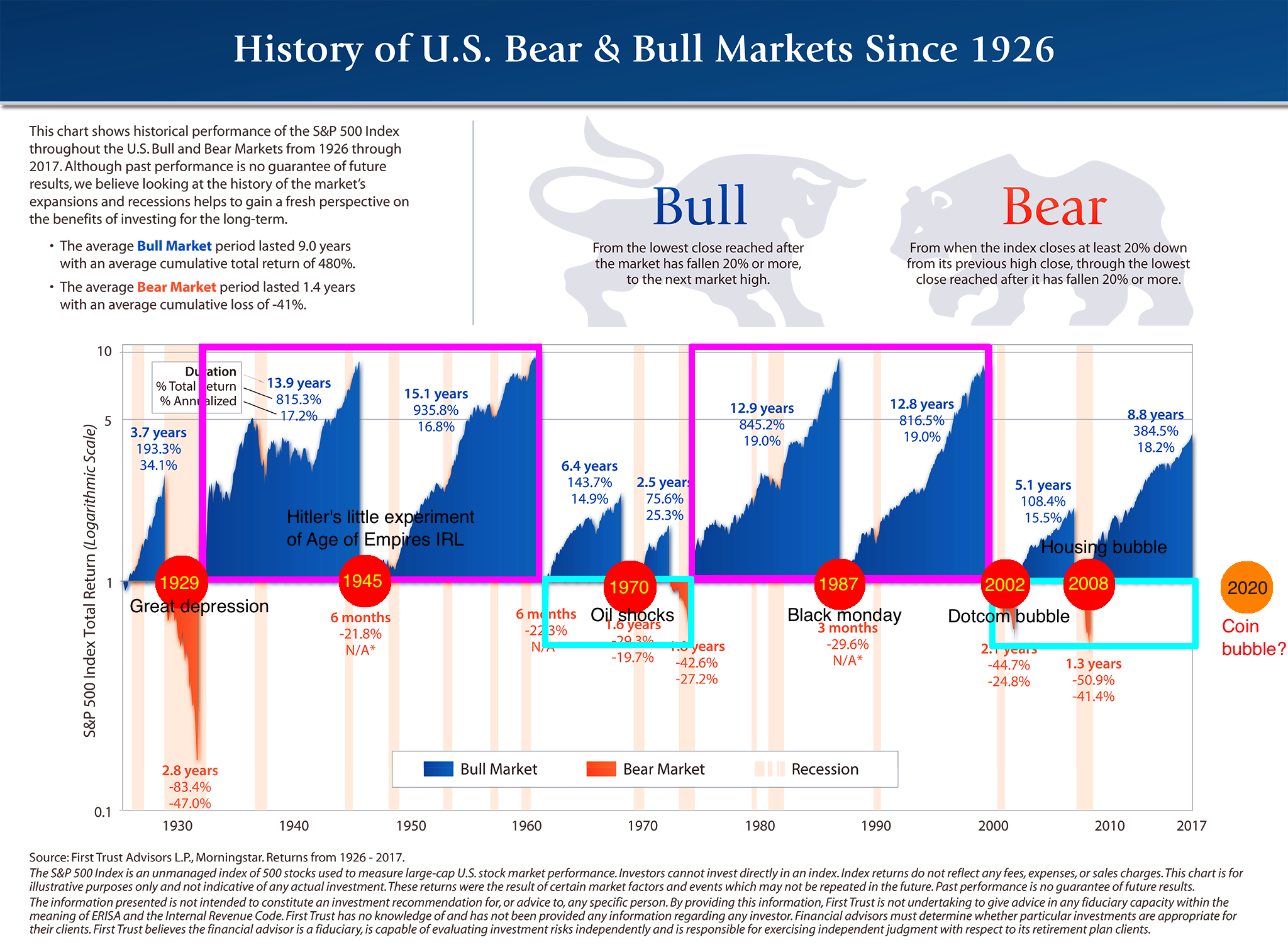 I've taken my time to plot the important events which caused each of the above bear markets.

Starting with the Great Depression of 1929-1939, you can read some long clever bullshit on Wikipedia about the different economic views on what caused that revolution. However, I am trying to provide a way shorter and concise explanation of these abstract writings, thanks to a fat book of American history between 1800 and 2000 I've managed to pull off this summer. Things ain't that complicated and obscure actually. After the Civil war (1861-1865), the American society entered the "Reconstruction era", with an emphasis on manufacturing and infrastructure projects. The automobile (Model T of Henry Ford) has disrupted the transport industry between 1908 and 1927. In 1903, the Wright brothers have made the first successful flight with an aircraft. Andrew Carnegie was ruling the Iron industry and John D. Rockefeller had established the oil monopoly of US. Finally, there comes a World War with the unique opportunity for all these products to be sold to fighting allies in Europe. Factory production is maximized, requiring more workers to be employed. After the war is over, the demand sharply drops, together with the overall trade with Europe (everyone is busy recovering) which creates a huge demand gap. All of these major events were totally disruptive and the economy couldn't have held any longer.

After "Hitler's little experiment with Age of Empires IRL" (also known as World War Deux) has ended, the economy has again entered in a recession (understandably from the reasons stated above), followed by the infamous "Baby boomers" era.

Trade was already limited with half-a-world during the Cold War. There came a point when the Organization of Arab Petroleum Exporting Countries started an embargo of not selling oil (especially to US) for the supporters of Israel. If you pay attention closely in the news you will notice that after this incident every single US president has been extremely careful always to be the lower hand in interactions with the Saudi government. This was an artificial bear market however, not related to any economical disruptions.

Then comes the Internet together with the speculative Dot-Com bubble, which was truly crazy.

It doesn't take a genius to notice that each decade has 1 or 2 "regular" crashes together with major recessions occurring right after 2 bull markets. It's already 2018 and we have not encountered any severe crashes since the Global crisis of 2008. And again, people have too much money, smartphones and time at their hands with too little financial wisdom and reticence. A major red flag. Don't get me wrong, I really do believe in future paper money is going to almost disappear in favor of digital currencies. China has already done so, on government level. What I fear about is the destruction of the current banking systems. Yes, indeed, some banks are already preparing to introduce Bitcoin among their services, like JP Morgan. However, industrial disruptions always take out of the business those who don't react quick to the change. And besides that, banks are famous to fail even without their industry being disrupted. Actually, some people do it just for fun (Hello Peevski and Soros!).

I am a fan of Schumpeter's idea of "Creative destruction". In his paper, one of his core ideas are that in order for new value (industry) to be created, the old one must be destroyed. Because, let's face it, you have the same amount of consumers "before" and "after" the destruction. As Andrew Grove of Intel calls it, these are the "Strategic inflection points" of the industry.

I'm also very interested in disruptive technologies. Viewed from the lens of history, they provide an accurate recollection of the events of how an industry was disrupted, rendering as winners those who has adapted during the point of inflection, and everyone else as losers. During the 1970s, Intel was the dominant player (starting with 100% market share, then losing its monopoly as competitors enter but still maintaining a key player role) in the memory chips market. Actually, they've created the first dynamic memory chip. It was all going well, until in the 1980's the Japanese companies (which unlike Intel - an almost self-vested startup), were funded with "infinite capital" from the government, thus providing a very serious edge in the research & development and economies of scale factors. And trust me, in the chip business, economies of scale do matter. Below is an illustration from the book of Andy Grove, "Only The Paranoid Survive", how this has hit the American chip manufacturing companies:

Market share of US and Japan during the 1980s in production of chips: 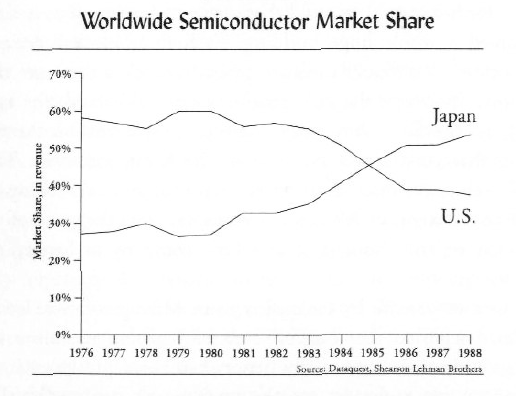 If you follow history through the 1980s you will also come to read about hardware companies (like Novell, Unisys and others) which were initially involved in the manufacture of niche hardware equipment for mainframe computers switching to software components due to the decisive defeat of mainframe computers by the PC.

Disruptive technologies during the 20th century in US: 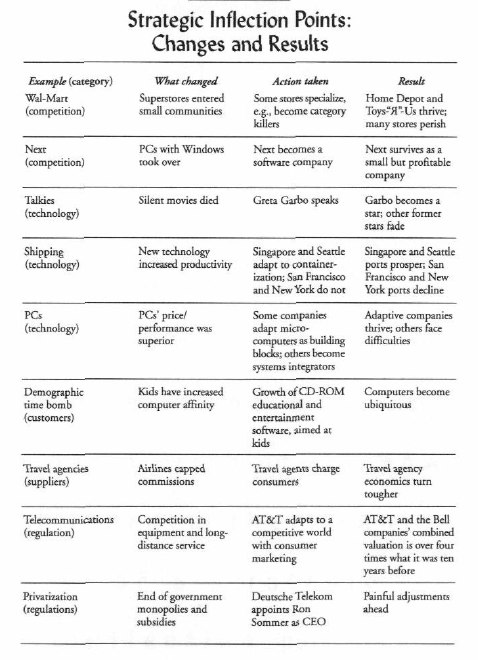 My personal take on the situation is as follows: History has proven that each time an industry is disrupted, someone has to go out of business, so the new man of the day takes the wheel.

However, this time there's a little trick. The banking industry has not been quite disrupted for long time since the "Gold standard". Besides, when Henry Ford created model T or IBM introduced the Personal Computer, no presidents got shot. Now, add to the equation a crazy and fat version of 2002 Eminem blonde ruling the politics of the country with the highest foreign debt in the world and the things start to add up. The weight tilts. And trust me, I'm the last person to start conspiracy theories, especially as someone relying on data in his own business.

So, currently with all this speculation going on for Bitcoin everyone has hyped up. Your classmates are asking you whether or not they should spend a thousand on a coin. As if they are going to listen to you. They already have that extra cash to burn. And no one wants another iPhone or Samsung Galaxy 10, they want a new experience, something modern and unknown, in order to differentiate and feel alive once again.

A lot of institutions like the European Central Bank are warning that digital currencies might be a financial bubble.
You never know when you are about to encounter an inflection point.
All you can do is watch for the early signs and make sure that you are prepared.
This blog post should not be interpreted as a financial advice in any way.

finally someone to nail the truth for all this economic nonse